The Wellesley development, Aldershot Barracks will include the development of up to 3,850 no. dwellings, demolition of buildings, a local neighbourhood centre, two primary schools, a waste facility, associated green infrastructure, Sustainable Drainage Systems, together with Suitable Alternative Natural Greenspace (SANG). The development will be a multi-phased development between 2013 and 2026.

Since the project began over 25 bat roosts have been recorded for low numbers of common and soprano pipistrelle, and brown long-eared bats. In addition to bats, reptiles including common lizards, slow worms and grass snakes have been recorded. Three badger setts were found and suitable foraging habitat was also identified. A breeding bird survey recorded a total of 38 species, 34 of which were confirmed as breeding on site. Fifteen of these are of conservation concern.

Permanent roost provisions will be created for bats in the properties being constructed and bat foraging habitat and connectivity is included within the design scheme. In addition buffer strips within no additional lighting will be provided within the SANGS, providing dark conditions for the light sensitive species, in particular the Myotis species. Reptile mitigation including the translocation of species onto off-site receptor sites has taken place. The SANGS will be enhanced through a planting scheme, the erection of bird boxes, bat boxes, log piles, construction of five hibernacula and hedgehog domes. In addition, 110ha of derelict woodland along the Basingstoke Canal will be brought into active conservation management, with the SANG now secured in perpetuity through a partnership between Grainger, the Land Trust and the Blackwater Valley Countryside Partnership. 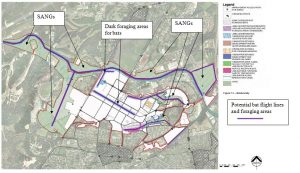 Location of SANG and bat corridors 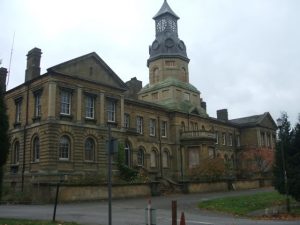